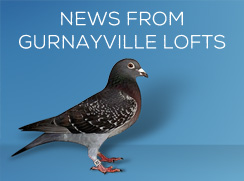 A lot has happened in the Australian pigeon world since my last update with not a lot of it being positive. The obvious main talking point has been the spread east of the Roto virus from where it was first reported in WA. It has now been reported in 4 eastern states. Just as this virus didn’t magically appear it won’t magically disappear. There has been much debate re how we move forward and thankfully we have Dr Colin Walker to help guide us. I agree with Colin 100% that a vaccine will be our best way forward and this is currently being worked on. Greed and stupidity seem to run hand in hand and this has led to the speed and breadth of the virus’s spread.

Obviously some people who had ordered race teams from me chose not to go ahead with these orders which was totally understandable given the circumstances. I also elected not to send out any stock birds that have been ordered until it becomes clearer how we will be dealing with the virus long term. Everyone who ordered birds has agreed with this policy.

One loft races have also been affected by the virus. To Steve Zanders credit he stopped taking entries at the first sign the virus had spread east and whilst the numbers are greatly reduced at this stage he will still be conducting the race in a shortened form this year. Luckily I was able to send my 10 entries the weekend before the loft shut and at the recent loft audit i still had 9 left.

From a stud’s point of view no racing basically means a wasted year of breeding and getting feedback on performance, both good and bad, however I still believe it would have been in the best interests of slowing the spread of the virus if no racing had occurred this year.

Hopefully there is some light at the end of the tunnel and the virus can and will be managed going forward. I wish you all well in your endeavours whatever they may be.